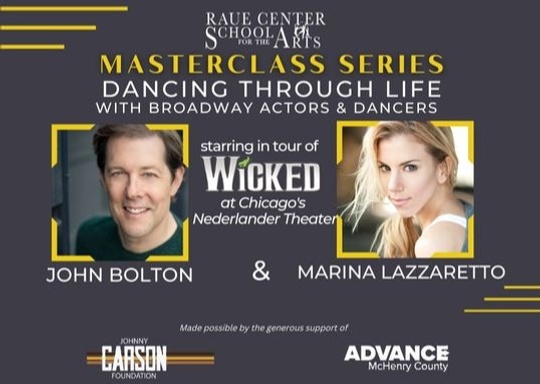 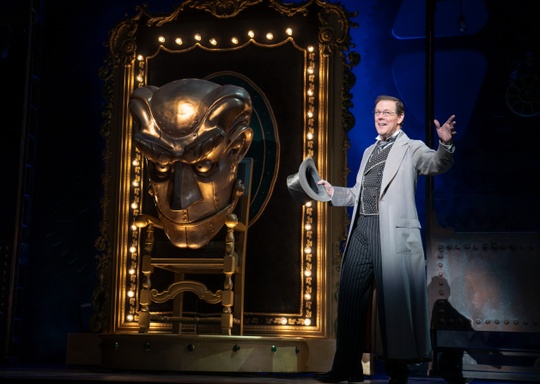 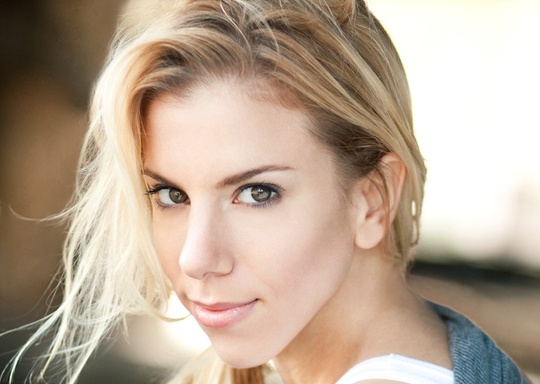 Raue Center School for the Arts: The Masterclass Series - Dancing Through Life

Raue Center School For The Arts is thrilled to present a Masterclass taught by Broadway veterans John Bolton (The Wizard) and Marina Lazzaretto (Female Swing), stars of the National Tour of Wicked, now appearing at the Nederlander Theatre!

This Masterclass is brought to you in part through the generous support of the Johnny Carson Foundation.

John and Marina will take participants through dances in the style of Wicked as well as a brief audition workshop.  Also, these extraordinary performers will share stories from their time on Broadway and touring around the country.

Tickets are $10 for RaueNOW Members and $15 for the General Public.

We will be ending the evening with a Q&A, so please feel free to submit questions in advance to rcsaeducation@rauecenter.org. These questions can be about anything from 'What's your favorite show you've ever been in?' to 'How do you succeed on Broadway?'

John Bolton starred on Broadway as Vlad in Anastasia (Outer Critics Circle, Rivera Awards nominations), The Captain in Dames at Sea (Astaire Award nomination), The Old Man in Christmas Story the Musical (Drama Desk nomination), as both Grady and Cioffi in Curtains, King Arthur in Spamalot, Michael in Contact, Charles Lightoller in Titanic, and J Pierrepont Finch in How to Succeed… He made his Broadway debut alongside Jerry Lewis in Damn Yankees. On tour, he was Horace Vandergelder in Hello, Dolly! and is currently playing The Wizard of Oz in Wicked. He headlined 4 sold-out concerts at Carnegie Hall and has been a soloist with the NY Philharmonic at Lincoln Center. On TV, Mr Bolton had recurring roles on The Blacklist, Madam Secretary, Unbreakable Kimmy Schmidt, Gossip Girl and All My Children and has guest-starred on Evil, FBI, Elementary, Blue Bloods, Boardwalk Empire, The Good Wife and Law and Order. He is featured in the film Mapplethorpe.

Originally from Alberta, Canada, Marina Lazzaretto is a New York City based Dancer, Singer, and Actress. Marina is currently in the national touring company of the hit Broadway show Wicked. She has performed all over the US and Internationally in productions such as: The Broadway and First National Touring companies of An American In Paris, the First National Tours of Cats (revival) and Twyla Tharp’s Come Fly Away,  The New Yorkers  at Cit Center Encores, the Off Broadway Companies of Trip of Love and Doctor Faustus and the Broadway Company of West Side Story. Most recently Marina has just finished filming Season 2 of the new Apple TV Musical Series “Schmigadoon”. She has also been seen on television in “The Marvelous Mrs Maisel”, “Fosse/Verdon”, “The Tonight Show”, “SNL”, “The Late Show With Stephen Colbert”, and “Best Time Ever with Neil Patrick Harris”.  Marina has also been fortunate enough to work with the Verdon Fosse Legacy since 2013 honoring the work of the legendary Bob Fosse.  For more info visit marinalazzaretto.com Instagram @marinalazz

Doors open at 6:00pm. Seating is on a first come first serve basis. Photography is welcome, but videos are strictly prohibited.

Q: Who is allowed onstage for the dance portion of the evening?

A: Anyone who is interested! If you plan on going onstage, please make sure you are dressed in clothes and shoes you can move in. Anyone and everyone is welcome for the dance portion, with no age requirements!

Q: What if I don't want to get onstage and just want to watch/listen?

Q: What is the point of a Masterclass?

A: Masterclasses offer our patrons and the entire community remarkable opportunities. We thrive and grow when we are exposed to the unique and varied approaches and ways of thinking expressed by artists at the top of their craft. Masterclasses like these in the city can run as much as $200 per session. So it’s a great value, too.

Q: I want to sing for the audition portion of the workshop. What do I do?

A: That's great, we'd love to have you! Please email rcsaeducation@rauecenter.org. Slots will be randonly picked the week before, and three people will be given a ten-minute time slot in which to perform.

If you have a child, please plan to stay in the theatre with them - this is not a drop off event. Everyone is welcome with or without children though!

Raue Center For The Arts Location

Raue Center for the Arts