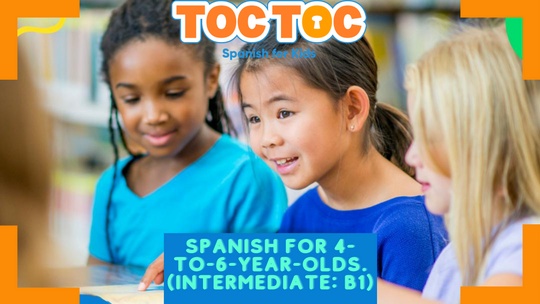 Join us at Toc Toc! Our class Spanish for 4 and 6-year-olds teaches Spanish to kids in a fun way through songs and games. After registration, we'll place your kid in one of the different levels: -Level 1. Mainly taught in English, it’s perfect for kids whose parents only speak English at home. The kids will learn basic Spanish vocabulary: colors, numbers, and animals, such as manners and good habits in Spanish. -Level 2. Spoken 75% in Spanish and 25% in English, it's great for kids who speak some Spanish, or who understand Spanish but communicate their ideas in English. We'll see plenty of conversational Spanish and we'll cover a variety of topics such as Holidays and the people and things around us. -Level 3. Great for kids with enough knowledge of Spanish, who communicate in Spanish but need vocabulary acquisition and improvements in their grammar or pronunciation. Through songs and storytime, we'll cover a variety of topics such as Holidays, the world around us, and the fantasy world. Duration of this class: 30 minutes.

Geraldine Quiroga is from Mexico, she’s 23 years old. Before joining Toc Toc, she worked 3 years in a Preschool teaching a second language to kids. Geraldine has a Bachelors in Graphic Design, and made the switch to teaching when she realized her love for working with small kids. Her artistic background make her Spanish classes quite fun since she loves to encourage imagination, exploration, playing games, and always add some artsy touch to each class. Geraldine is currently creating our tea